Sweet potatoes are abundant during these cold winter months. They’re naturally very flavorful and extremely rich in vitamins and minerals (Vitamins A, C, B6, as well as Calcium, Iron, Maganese, Magnesium, Potassium, Fiber and Beta-Carotene). Check out these links to find out the nutritional fact details about sweet potatoes:
www.nutritiondata.self.com/facts/vegetables-and-vegetable-products/2667/2

Want a tasty recipe for sweet potatoes that’s so easy it’s barely a recipe and it’ll give you your fix for french fries?
By Maria’s request here the recipe for the Sweet Potato Fries that has become a default recipe for me when I don’t know what to make. Thanks to my Aunt Ronda who showed me how to make these several years ago!

Directions:
1. Preheat oven to 400 degrees.
2. Slice sweet potatoes into long thin french fry shapes (about 1/4″ to 1/2″ in thickness). Try to keep the thickness of each piece as similar as possible to ensure they cook at the same rate.
3. Place sweet potato fries onto large rimmed baking sheet. Drizzle with a little Extra Virgin Olive Oil (add a little at a time, just enough to slightly coat each piece). Salt and Pepper to taste.
4. Toss sweet potato fries to coat evenly.
5. Spread sweet potato fries so the baking sheet has a single layer of fries. (You may need to use more than one baking sheet to fit them all, so they’re a single layer).
6. Bake in oven 10 to 15 minutes. Remove. Using a spatula flip the fries over.
7. Bake another 10 to 15 minutes. Remove and test with a fork to see if they are tender. Serve and enjoy!
(especially good with Trader Joe’s Organic Ketchup)

Let’s address the first issue: Stress. People who don’t manage stress in their lives well can get physically ill from it. Various studies have shown that chronic, unmanaged stress runs down the immune system by reducing the number of your body’s fighting cells. Stress can manifest itself physically in the form of a common cold, acne, stomach ulcers, high blood pressure, etc. So, build your immune system by finding healthy ways to manage your stress. Check out this great list of 10 Healthy Ways to Manage Stress from Reader’s Digest: www.rd.com/living-healthy/10-ways-to-manage-stress/article12557.html

How does sleeping more affect your body? A recent study shows that people who get less than 7 hours of sleep a night are three times more likely to catch a common cold than people who sleep at least 8 hours a night. Being sleep deprived causes your body’s fighting cells to drop in numbers, allowing it to be more susceptible to infection. This same study shows that its not just about the quantity of sleep but the quality as well. So, turn off the TV early tonight and catch some extra zzzzs! 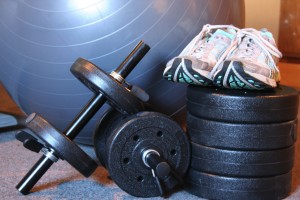 Regular aerobic exercise has been proven to prevent colds, flues and the like. When your body is moving it pumps more blood, gets more oxygen into your blood, and increases levels of white blood cells that help fight off those nasty ailments.

So, keep moving this winter! 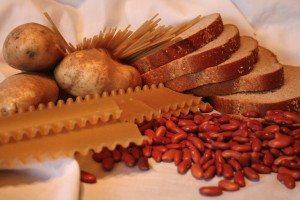 In my “Ask Away” post earlier this week, Peggy from Texas asked for a soup or stew recipe that is low in carbs. I have to admit that with all my dietary restrictions I eat a lot of carbs from beans, potatoes, corn, rice, etc. So, this stumped me at first. I read up a little on low carb diets. So, here’s some really basic info on low carb diets and then a recipe per Peggy’s request.

What is a low carb diet?
A low carb diet generally allows anywhere from 20 to 50 grams of carbs per day. Low carb diets include South Beach Diet, Atkins Diet, the Zone, Suzanne Summers, and Protein Power. Each of these diets varies in the amount of carbs they allow with Atkins allowing less than 20 grams and the Zone allowing up to 30% of your daily caloric intake to be from carbs.

How a low carb diet works?
I found this great explanation of how the low carb diet works at www.low-carb-diet-recipes.com/how_low_carb_work.htm,
“When a high-carbohydrate meal is consumed, the increased blood sugar stimulates insulin production by the pancreas. Insulin is the hormone that allows blood sugar to be used by the cells. However, a side effect of insulin is that it causes fat to be deposited, and it stimulates the brain to produce hunger signals. As a result more carbohydrates are consumed, and the cycle repeats.”

Low Carb Soup Recipe: Beef Vegetable Soup
I have to admit I haven’t personally tried this recipe yet, but it really sounds great! Peggy from Texas, hope this is a great solution for warm, comfort food that follows your diet plan! Recipe source www.lowcarbdiets.about.com/od/soupsandsalads/r/beefvegetablesoup.htm 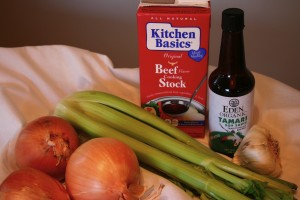 Recipe yields about 10 one-cup servings. I suggest freezing in individual serving portions for a quick heat up meal.
Nutritional Information: Each serving has 7 grams effective carbohydrate plus 2 grams fiber, 16 grams protein, and 162 calories. 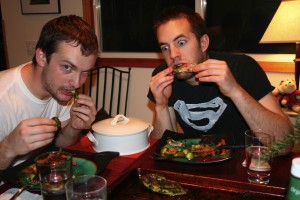 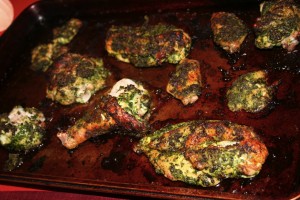 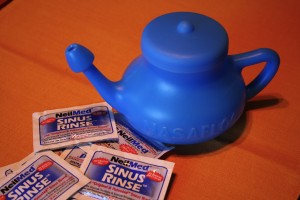 Whether caused by a cold, allergies, or a temperamental immune system sinus issues are not only annoying but painful. Other than a nasal decongestant, what can clear your sinuses?

Nasal rinses, like “the netti pot” have been a sinus saver for many. A saline and purified water sinus rinse cleanses the sinus cavities of mucus and bacteria, while moisturizing which is especially perfect during dry weather months.

Yep, its a little tea pot for your nose. You pour the saline solution into one nostril and tilt your head over the sink so that gravity allows the solution to come out the other. You can buy a kit at the drug store that has the netti pot and packages of the solution included. Follow the instructions on the package.

If your nose is totally clogged, like at the worst stage of a cold, it may not be the best option as it may not go through. But, the netti pot can clear runny noses, relieve sinus headaches, and prevent colds.

Believe me, I was a total skeptic when I first heard of it too. I just thought the idea of salt water going up my nose cannot be natural. The first time I tried the netti pot I have to admit that it felt a little strange. But, I now use it all the time. It gets rid of nasal congestion that is present even when you don’t have a runny nose…you know the kind that just causes sinus headaches or your eyes to feel like they want to close.

I’ve recommended the netti pot to friends who said they could never use it and now they use it all the time, so give it a try!

Did you just find out that you have to follow a restricted diet and don’t know where to start?

Did you find an interesting food in the grocery and don’t know what to cook with it?

Do you have a special event coming up and don’t know what food to make for it?

Do you have some random stuff at home that you’ve been wanting to turn into home decor but don’t know where to start?

Did you find a crazy object at the thrift store you just had to buy but have no idea what to do with it?

Let me know! I’d love to post answering your question! 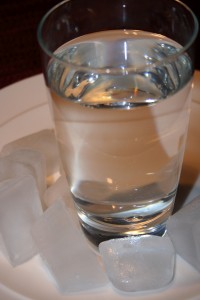 Fill up your glass at least 8 times a day with water to keep your body hydrated and flush your system, but go the European way and forget the ice. Downing cold liquids requires your body to exert energy to restore itself to its warmer temperature and also tightens the sinus cavities. So try room temperature water or warm herbal, roobios, or green teas. Drink to your health! 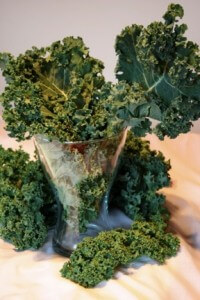 The seasonal veggie in the lasagna recipe posted yesterday is kale. Here’s a Closer Look at this veggie you may never have used.

What is it?
Kale is a leafy green grown in cooler temperatures, which make it abundant and affordable in most grocery stores during winter months. A cabbage relative, kale is easily identified by its very ruffled leaves. The younger leaves can be chopped into salads and eaten raw. But more commonly, kale is taken off the stalks, chopped, and cooked (sauteed, roasted, fried, grilled, steamed). 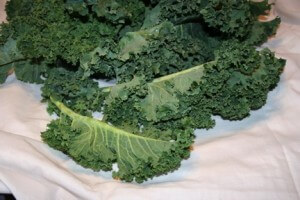 What’s in it?
Kale is a nutritionally loaded veggie that’s rich in vitamins A and C, calcium, vitamin K, folic acid, magnesium, and protein. Its a great source of calcium for those of us who don’t eat dairy products. It can be used in place of cooked spinach in most recipes.

How to get picky eaters to try it?
So whether its kids or a picky spouse you need to convince to try it, start with a recipe that uses kale but is familiar. I suggest to start with the recipe posted yesterday for the Sausage and Kale Lasagna. Lasagna is something that most people like and are familiar with. Try making the recipe and not even mentioning that there is kale in it. There are so many other flavors in the recipe (from the sausage, tomatoes, and cheese), your picky eater may not even care about the green stuff in there.

Hope you’ll try kale and love it. Who knows, it could become a green you love and use time and time again! 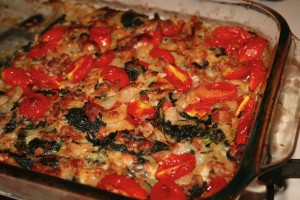 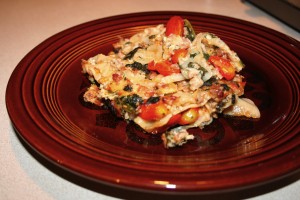